November 2, 2021
admin
Board Activities, Board News, CFCC Events
2021, board of directors, installation

November 2, 2021
admin
Board Activities, Board News, CFCC Events
2021, board installation, board of directors, installation

NOTICE OF PERMANENT ADJOURNMENT OF AGM 2020

President Pius Chan and the Board of Directors of CFCC jointly announced that due to the spread of COVID – 19 Virus in BC, Canada, the Annual General Meeting (AGM) which is scheduled to take place on April 23, 2020 is hereby declared permanent adjournment. The AGM 2020 with… Read more ›

The 31st Annual General Meeting of members of the Chinese Federation of Commerce of Canada will be held at Continental Seafood Restaurant, 150 – 11700 Cambie Road, Richmond, B. C. at 5:30 p.m. (Pacific Standard Time) on Wednesday, April 23rdth,… Read more ›

President and National Board Chairman elected in AGM in 2017 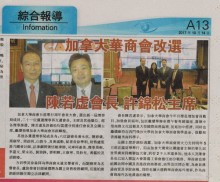 Congratulation to new Board of Directors elected including President Mr Pius Chan and National Board Chairman Dr Joseph Hui.

October 19, 2017
admin
Board Activities, Board News 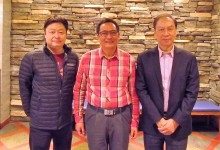 28th Board of Directors Installation

Celebration of the 28th Board of Directors Installation was held on October 21, 2016 at Executive Airport Plaza Hotel in Richmond. Presence were the Hon Suzanne Anton, as officials from federal, provincial and municipal governments as well as representative from… Read more ›

The 28th Board of Directors is elected during AGM on September 29th, 2016

September 30, 2016
admin
Board Activities, Board News 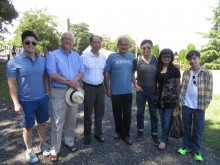 MLA John Yap hosted a BBQ Party on BC Day 01AUG 2016, to entertain the residents of his riding and his supporters.  CFCC President Dr. Joseph Hui, took a good photo with MLA John and Mayor of Richmond His Worship… Read more ›