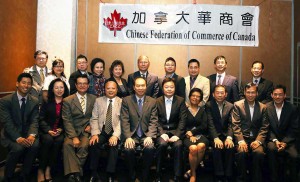 CFCC had held our AGM on September 11th, 2014 at Neptune Seafood Restaurant in Richmond, BC.  The board reported to attendee the work of CFCC last year.  The association had had a great year.  CFCC is highly regarded in the community.  We are constantly invited to local events as well as by government official locally and in China.  Army cadet fundraising event was as successful as before.  The association is financially sound, thanks to the hard work and contribution to directors, oversea directors and members.

Partial image galleries can be found below.